The 5th Triennial IFFAS Scientific Meeting, scheduled for September 21-23, 2011, in Nara, Japan, unfortunately was cancelled due to major disasters that struck Japan earlier that year. The destructive earthquake, massive tsunami, and the nuclear radiation problems that followed created difficult circumstances for travel and meetings in Japan. The leadership of the Asian Federation of Foot and Ankle Surgeons made the difficult decision to cancel the meeting.

The organizing committee had planned an excellent scientific program and accompanying social events and the Asian Federation was looking forward to hosting orthopaedic foot and ankle colleagues from around the world in Nara. The large number of abstracts submitted for the meeting were judged by international faculty members, and a CD of the final program was distributed to all registrants by the organizing committee. 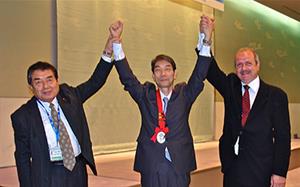 The meeting was to have marked the transition of the IFFAS presidency from Osny Salomão, MD, of Sao Paulo, Brazil, to Mitsuo Kinoshita, MD, of Osaka, Japan. Instead, the 36th Annual Meeting of the Japanese Society for Surgery of the Foot, scheduled in Nara to coincide with the IFFAS meeting, became the backdrop for the symbolic transfer of office. Yoshinori Takakura, MD, president of the Japanese Society and first IFFAS president, was on hand for the ceremony. Traveling from São Paulo as a representative of Dr. Salomão, João De Carvalho Neto, MD, transferred the IFFAS presidential medallion to Dr. Kinoshita during a ceremony at the meeting.

The Japanese Society for Surgery of the Foot and its members were grateful for the many expressions of support received from around the world and look forward to seeing colleagues at the 2014 Triennial IFFAS Scientific Meeting in Chicago, Illinois, USA.​